A disproportionately high number of my friends work in the STEM subjects. I also have a disproportionately high number of friends who are feminists. My social circle at the moment feels a bit like this. But with WAY MORE OVERLAP (I can’t draw Venn Diagrams). Also – all my friends are awesome. I couldn’t really write “ALL THE FUCKING AMAZING AWESOME RIGHT NOW” in the middle bit without looking a bit childish. #ShirtStorm happened this week. 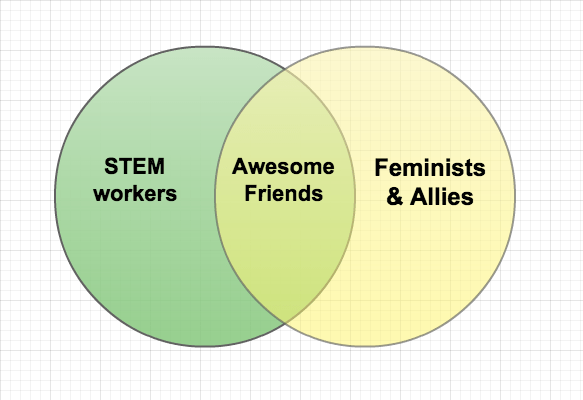 So my Facebook feed has been full of #ShirtStorm for the past few days. For those of you that don’t know what happened, some awesome chap landed a spaceship on a comet – which was very cool. Except he wore a shirt that lots of people found frustrating for various reasons. Then the cesspit of the internet got upset with these people for finding it frustrating. And spawned memes. And of course the whole thing reinforced Lewis’ Law – The comments on any article about feminism justify feminism.

Lets just take a look at the shirt that he was wearing before we go any further. 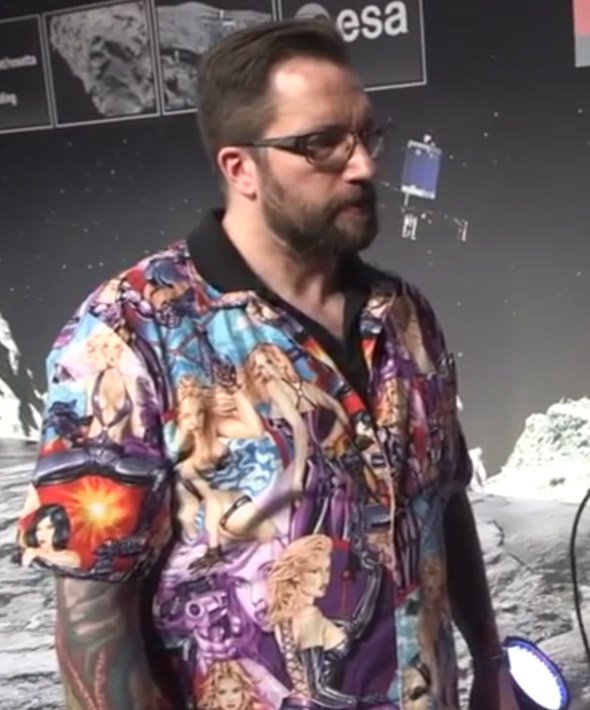 As well as wearing this particular shirt to the press conference announcing the landing, when asked about the difficulty of the Rosetta Mission, Matt Taylor replied with “She’s sexy, but I never said she was easy.”

“She’s sexy, but I never said she was easy.”

I’d like to address this before we get onto #ShirtStorm. Because I think it’s important for context. I’m going to let this twitter user start for me:

people who think the #shirtstorm incident is an isolated one are literally having a forest/trees observation. Lemme sum up something:

Awhile ago I found some cool youtube videos about history, you may have seen them, they're by that guy who wrote that book that's a YA movie

And I saw that his brother did science videos along the same line and I went great, love me some science talk, and started the first one up

and was treated to the very first concept that Carbon is a slut because she'll bond with anyone. NO REALLY. That concept, presented that way

You see, there is a background of institutionalised sexism within the STEM fields.[1] The background radiation of sexism (the tweets above are a great example) means that – like it or not – the STEM fields can be a hostile place for women. And it’s not just women who work in the STEM fields either, it’s also young women who are at school and are considering perhaps going to university with a view to working in them and people like myself who are considering moving into them from their current work.

Casually sexist tropes like this all create the general feeling of women being ‘the other’ and that is not helpful to promote an industry that is diverse. And if there’s one thing that we’ve learnt over the years it’s that industries with good diversity do better. Making 50% of the population feel excluded from an industry doesn’t help anybody. Except maybe those who aren’t very good and got their jobs as part of the old boys network – but I digress. Or possibly those straight, white guys who realised that they’re playing life on the lowest difficulty setting available.

You see, this is a common theme for me. I worked in logistics and I like things like cars, planes, boats… you get the idea. In all those hobbies the machines are always referred to as ‘she’. Some days when indulging in my hobbies I feel a little bit like Angeline Jolie in Gone in 60 Seconds. In case you don’t know, all the cars they have to steal are given female codenames so that they can say talk about them over the radio using euphemisms for sex while plotting to nick them and avoiding the police. 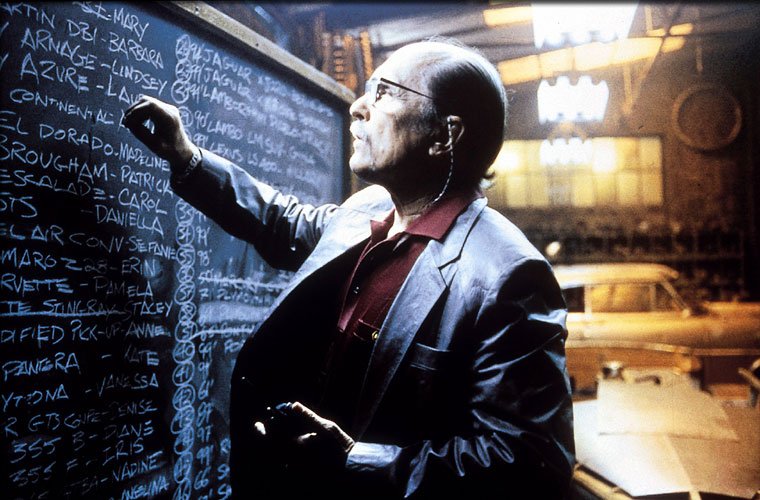 Except this is real life, not a film. And we have to put up with everything being given female names, being referred to as a female gendered object, using crass language to talk about objects as women… Sheesh. Why the fuck do we put up with this shit in our hobbies? I remember once when I was a teenager when someone asked me what my bass guitar was called. I told the guy that my electric bass was called James. He said it couldn’t possibly be called James because guitars had female names, because you caress them, play them, finger them and make them sing. ARGH!

This attitude of treating objects of women is just one of those little subtle signals that shows (usually without intention) that this is a male dominated sphere. Cars, boats, bikes, guitars, spaceships… you never see objects being referred to as male… do you? Of course you don’t. Because there’s a powerful link of ownership when you use these words. You’re reinforcing the idea that women are objects to be obtained and owned. It’s not very pleasant.

Altogether comments like this create an atmosphere that’s dismissive to women. And then there’s the shirt… 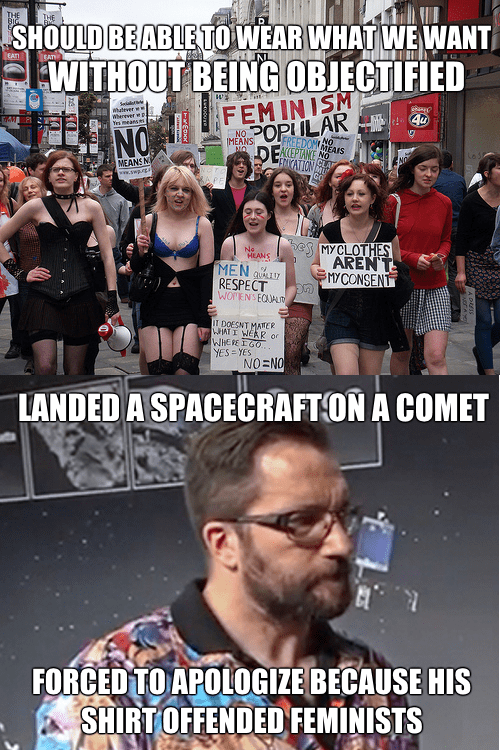 First off, lets check what we mean by the word ‘offend’.[2]

Yeah, so I’m offended by this shirt. And I’m a feminist. So I guess that means that his shirt did offend feminists. Or at least some feminists. I’m upset, annoyed, resentful and I feel it’s caused problems. More than anything though, I’m really fucking frustrated. I’ll take a look at ‘why’ in a sec.

A friend of mine wrote this on his Facebook recently. He’s a senior teacher at a mixed gender secondary school.

Right. There is an issue with encouraging girls into science. There is a reported issue of institutionalised sexism in science professions . These are big issues that need fixing for us to have a decent society.

Landing a satellite on a comet is fucking awesome and should be used to encourage/inspire people into science.

Does the fact that (until it hit social media) noone saw this as a problem, highlight the endemic problem in the profession. Yes. Only would have taken one person to say.. dude, do you think that shirt’s appropriate…Put on a work one before you’re interviewed.

People need to stop confusing the two. This is an awesome achievement and the team of scientists were ace scientists.
There is an issue in the profession that we should deal with this. Internally or externally.

I want to show this to 16 year old girls and say science and maths is great… You should consider this for a profession.
I do have an issue doing this due to his dress sense.

It’s still an awesome achievement though

Too many people are Missing The Fucking Point. No one (I promise you) is deriding this guys achievements in the world of science. I can’t think of anyone who thinks that landing a spaceship on a comet is anything less than absolutely fucking incredible. I mean the guy is brilliant and his achievement is something that should be celebrated.

Like the the points made above, this shirt conveys a message of ‘this is a male environment, women are welcome if they look sexy or shut up’. This issue of pornographic images at work (because yes, these are sexually titivating images and I’m going to label them pornographic) is one that many British feminists in particular are familiar with due to the No More Page 3 campaign. They wrote a good article on their site about how porngraphic images at work constitute sexual harassment. It’s actually against the law to force people to view this kind of sexual imagery.

The Equality Act 2010 says that the following constitutes harassment in the workplace:

When unwanted conduct related to sex has the purpose or effect of violating an individual’s dignity or creating an intimidating, hostile, degrading, humiliating or offensive environment for that individual.

Wearing a shirt with highly sexualised images of ‘perfect’ women in skimpy fetishistic outfits who are brandishing guns while in the workplace is something that adds to an intimidating, degrading, humiliating and offensive environment for many women. It is not acceptable in the vast majority of workplaces. Indeed in the UK, I would be confident to complain about this to an employer and take it to a tribunal if required. (For the record I understand that a female friend made it for him. It’s irrelevant. It’s also irrelevant that some women are not offended by it. Again it’s saying that women are valuable in this environment for their sexuality rather than their brains.)

How can you show a video of this press conference to a 15 year old GCSE student and tell her with a straight face that if she goes into science that her body will be valued more than her brain when one of the leading space scientists in the world is wearing a shirt covered in flawless pneumatic tits? What kind of a message does this give her, let alone the guys female colleagues.

I don’t think that Matt Taylor was malicious. I don’t believe he’s misogynistic. I believe that he’s a misguided geek who aimed for ‘cool’ but landed on ‘unprofessional’. Recently in the news there was an article about how the education secratary believes that STEM subjects are far more important than arts subjects, but to me this is a perfect example of why both paths work together in harmony. This guy can launch a rocket and put it on a comet, but he doesn’t have the first clue about behaving in a way that doesn’t intimidate a large portion of the world. This is why we need social sciences, arts and humanities. It brings the humane side to the science 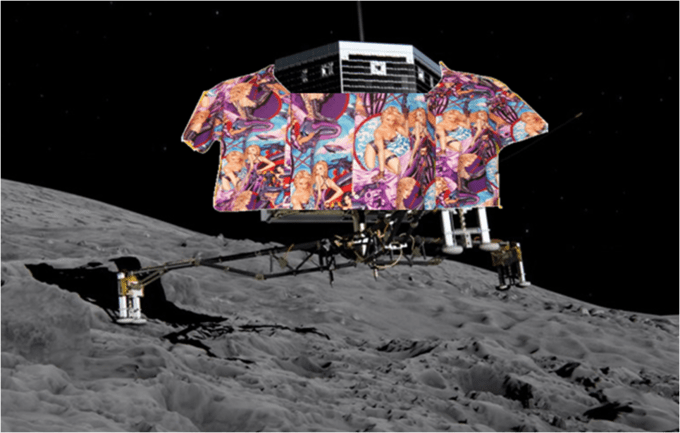 And then of course there’s the shitstorm that happened. Like I said right at the start – the comments on any article on feminism justify feminism. So many people are complaining at feminists and their allies for ‘making a fuss’ about the shirt and suggesting that their fuss is overshadowing the achievements of the team of scientists that landed a probe on a comet (including women scientists, I should add).

One of the things that really gets my goat is people saying things like ‘feminists should pick their battles’ or ‘there are more important issues in the world to worry about than a little sexism’.

But the problem with the people who complain about the feminist response is that they’re perpetuating the message: women are welcome in Science, as long as they shut up and don’t cause a fuss about the institutionally sexist barriers that they might face. And that male scientists should be given a free rein to do what they want, even if it upsets female colleagues and commenters, or prevents just one young woman from choosing science as her career.

There was more I was going to write, but I’ve been writing this on and off all day. And now I’m tired. And female scientists have had death threads for saying that they’re not happy with the image that this guy presented to the world. *le sigh*. 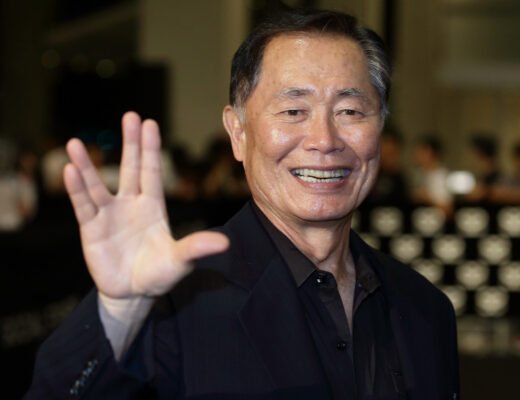 The Patriarchy and the War Wounded

The Lamentation of Google Reader