I have this problem. I pick at my skin compulsively. Disgusting, right? Apparently it’s called dermatillomania, I’ve been doing it since I was in my early teens. My biggest problem area for it is the pores on my face – my cheeks, nose, and chin.

I’ve been taking some time recently to try and fix stuff in my life that’s broken, and this one has come to the front recently. Since getting a big rash above one of my eyes – not related to the picking – I’ve been looking for solutions. Ultrabland skin cleanser from Lush actually saw the rash disappear in just two days. It’s like expensive little miracle cleanser! But what with all this growing stuff in the garden, I figured I’d see what I could do for my face as well as my stomach.

The first thing I tried was toner – to use after the skin cleanser from Lush. Rosemary and mint steeped in a cup of water, strained, and then two tablespoons of cider vinegar added. It works! It’s very kind to your skin, doesn’t leave it tight and dry, and the mint sauce smell disappears after just a few minutes. It’s gentle enough that I can pop up to the bathroom if my skin is getting a bit greasy during the day and use it. Next time though, it needs a dark bottle. Looks a bit like a jar of piss sitting on the shelf…

Today I got a bit more brave. I put the spice grinding mill on the food processor to work. You see I found this recipe on a blog where the author has a similar problem to myself. The mask is supposed to close up your pores so I thought I’d give it a go.

I dumped one tablespoon of oats into the food processor and processed the oats to get a fineish powder. Then I added some fresh rosemary from the garden for it’s antiseptic properties and processed it again. I emptied it into a bowl, added a splash of olive oil and then enough honey to make it thick. As you can see, I’m very technical in my approach to cooking and cosmetic making. 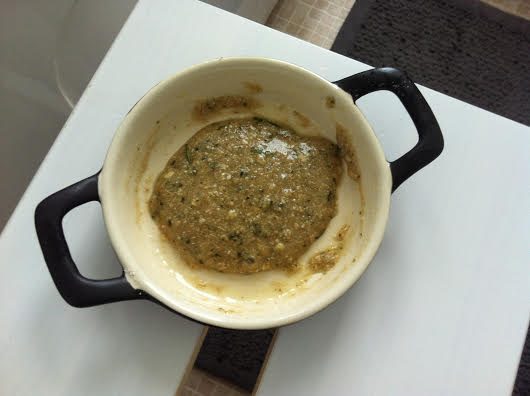 Honestly, give it a go. You sort of smush it all over your face and it’s half way between a mask and a scrub. I left it on for about 15 mins, it’s incredibly gentle so I guess could be left on longer. I don’t think I’ve ever felt my face feel so lovely and soft. It doesn’t feel quite as clean as using the Ultrabland (perhaps I should have used it first?) but it’s a fraction of the price and I know exactly what’s in it.

I’m hoping that when I sit down to have a pick at my face I can force myself to get up and make something like this in the kitchen instead. Then by the time it’s sat on my face for 10 minutes hopefully the urge to pick away will have passed and in time I can get out of the habit altogether.