It’s really great finding pieces in a good museum to use as a basis for costume because there can often be a fair bit of information about the piece. You especially know that you’re onto a good thing when it’s displayed in it’s own case in the middle of the gallery space, like this kaftan is.

Looking it up on the Metropolitan Museum website gives me this page. And there’s just so much info there to be had. Starting off with a fantastic picture – click to get the high resolution image and examine the garment in real detail. Far better than my rubbish phone camera shots – although my rubbish phone camera shots do serve a purpose. They let me see the back and they let me remember details that struck me at the time.

The pinky-red fabric is all modern conservation, the beige fabric and gorgeous patterned trim is all the original bits of this amazing 9th – 11th century kaftan from somewhere near what is modern Turkey.

Except it wouldn’t have originally have been beige. The Met are helpful enough to have provided information about the garment to help us understand what it might have looked like when it was made. The ‘white card’ description says:

The original linen coat (caftan), preserved in part from the neck to the bottom of the hem, is made of finely woven linen. A decorative strip of large-patterned silk is sewn along the exterior and interior edges of the caftan. A minute fragment of lambskin preserved as the caftan’s interior attests to its fur lining. The woven patterns on the silk borders of the caftan include motifs such as the rosettes and stylized animal patterns enclosed within beaded roundels, which were widespread in Iranian and Central Asian textiles of the sixth to ninth century. The colors used in the textile include a now-faded dark blue, yellow, red, and white on a dark brown ground. The decorated silk fabrics are a compound twill weave (samite in modern classification) and the body of the garment is plain-weave linen. Two slits running up the back of the caftan make it particularly suitable as a riding costume.

Did you know that apparently in many galleries and museums the white cards next to exhibits have to have be the same standard as the national reading age – which is about 12 in the UK. These were only ever intended as basic info. So far from this description I know that:

But we need more!

Linked to the page on the Met’s website there are three journal articles written about the Kaftan and it’s matching leggings. The first is an introduction, the second is a genealogy study and the last is the conservators report on the piece. This last one is where the gold-dust lies. These three journal articles can tell us huge amounts about the garment beyond what the white card does.

Here are notes from the journal articles, with my own speculations:

So then I finished off by taking a quick look through the Vecellio book of costume (from the 16th Century and before) and there’s a remarkably similar garment in the Persian section, illustrating a soldier. Unfortunately Vecellio doesn’t make any comments about the kaftan, only the armour and the horses tack that he would wear. But it does reinforce the idea of kaftans as riding garments. I also really like the way that the front flap is fastened up to the belt. That might have to happen for fighting and stabbing.

There are also similar garments in the Hungarian and African sections of the book, although they tend to not be asymmetrical closures like this one. 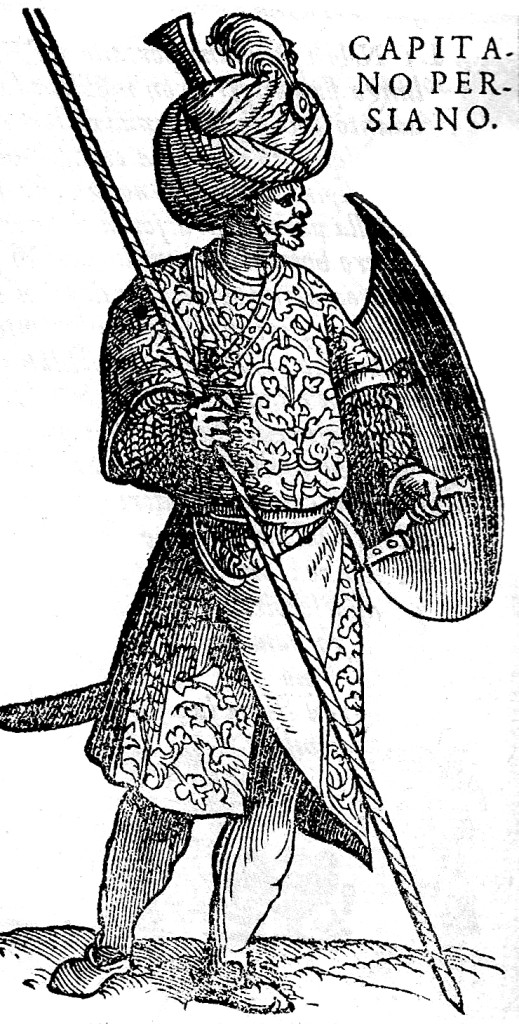 So what have we learnt…

So there we have it. Time to make the pattern pieces!