While drinking my morning coffee I clicked through to a few blogs I look at every now and again and was met with a post about photography at Empire LRP. Unfortunately I couldn’t comment on Jeremy’s post, so I figured I’d have a muse about it here. Interaction and replies on social media – whatever next!

For those who don’t know, I run the photography at Empire (and that’s me above, in my cool Empire outfit). I’m kidding of course, y’all know who I am, right? Right? You must do, otherwise you wouldn’t be here reading what I write about LRP. If you don’t know who I am, I’m just some crazy chick blogging about taking pictures of people who dress up in costumes and get muddy in a field. And that would be… weird. Anyway. 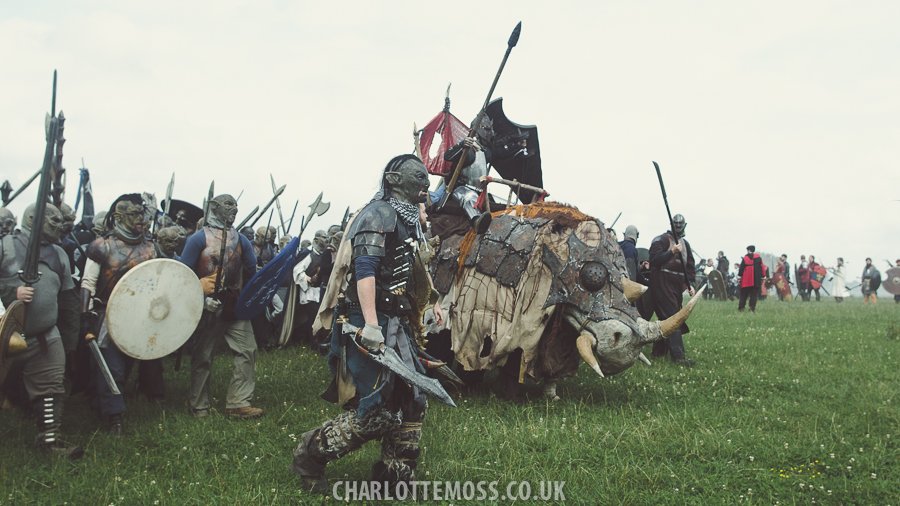 Right, now that’s over with (apparently everything you write about Empire at the moment must mention the War Rhino) we can get on with the intelligent stuff. Semi-intelligent. I write about photography, I’m not sure it’s that intelligent.

My presence wasn’t universally welcomed at PD and Empire. I put an awful lot of noses out of joint when I said to MattP ‘we can make this better’. I remember the conversation really clearly. There was an epic battle at the first ever Empire LRP and a moment at the end where the hero’s were trudging back to the Sentinel Gate. I crouched down, lined up a shot and realised that there were about seven or eight other photographers in my picture. I didn’t take the picture. It was a waste of good memory space. So I said to him ‘we can make this better’ at which point MattP explained something about immersion and stuff.

I’m don’t play LRP myself, so perhaps I don’t really get it. But I’ve crewed now with PD for two years and I think I’m starting to figure it out. I would always rather that people came to PD games to play them rather than photographing them. I believe that we have such a great game that no one should want to take time out to photograph it because they’d much rather be playing it. I don’t want six players taking pictures during a battle, I want them to get so much enjoyment out of being a great big god damn fucking hero that they don’t even think about retrieving their camera kit from their car. I want them to feel the electric buzz as they face off against hundreds of Orcs and A FUCKING WAR RHINO! 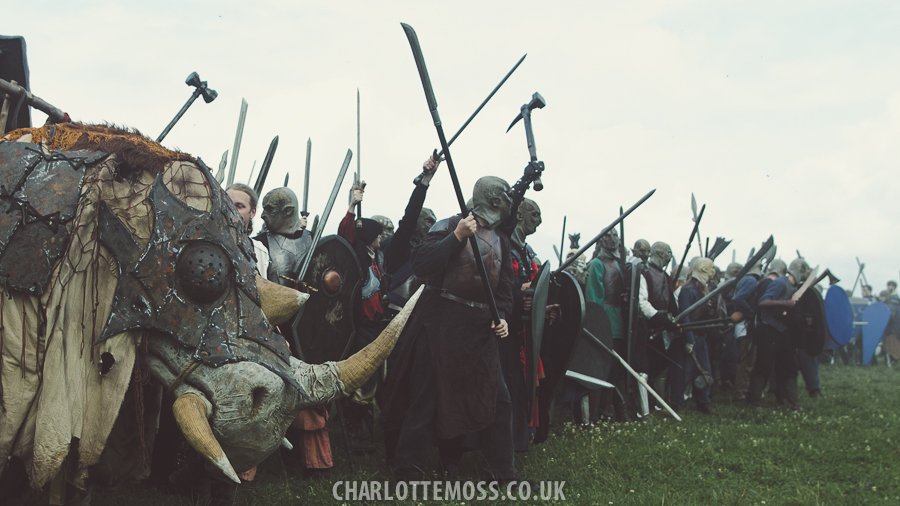 I know that playing the game is one of the highest compliments and measures of good feedback available to the writers and game designers too. If you’re playing it then you’re enjoying it and we’ve all achieved what we set out to do which is make a fantastic game that people WANT to play.

There’s additional considerations in this world of social media and the interwebz. At Empire LRP have a multi-million word wiki that requires quite serious amounts of imagery to prevent it from just being solid walls of texts. I think when I worked on the wiki this summer we had something like a thousand images displayed on it’s pages. With over a thousand players attending events (and a crew that is several hundred strong) you have to communicate how your world looks. Images are much more effective than words at this task.

Added to that, social media is an exceptionally powerful tool. According to my stats on Facebook, my pictures have sometimes been seen by around 50k people after an event. We don’t have more than 2k attendees so that’s a huge amount of people who are being exposed to LRP through photographs of an event.

Remember what MattP said before?

No words can convince a person that LARP is more than just a bunch of sweaty nerds in cheap costume waving toy swords around quite as effectively as a picture of neat Roman battle lines squaring off against a horde of Carthaginians.

Great pictures can make a huge difference. Other pictures – as was highlighted in the blog post that inspired this – occasionally don’t show the hobby in such a good light. As a crew we want to present the best image of our game that we can to players and potential players. That includes customer service, management, the game world and – of course – photographs. 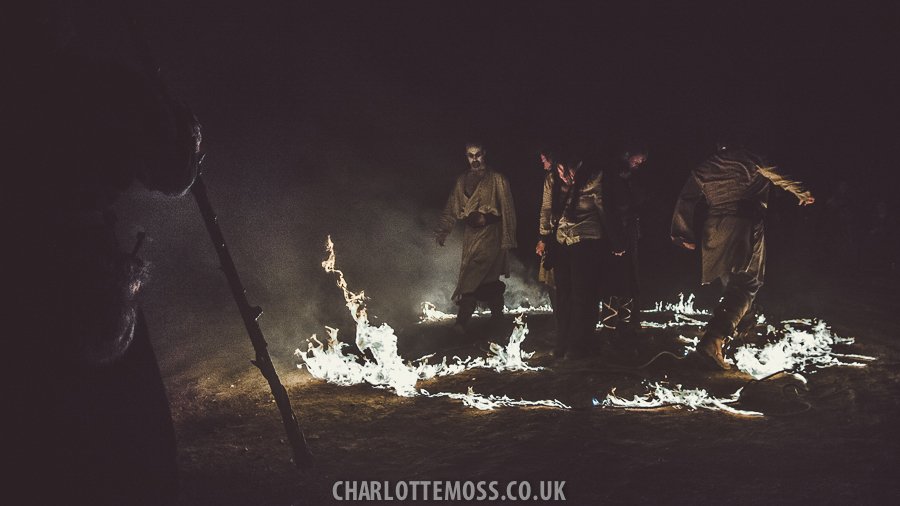 Jeremy is right though about his observation of players using camera phones and GoPros more and more. During Odyssey we caught a player who had fallen in the arena filming the battle as it happened and a fellow photographer at Empire had to bin a shot of a dramatic execution with awesome roleplaying because another player was shooting the action on his phone. Monsters taking cameras to battle and recording the action has started to become a problem that the ref crew have noticed and we’re going to knuckle down and do something about this next year.

I’d love to ban recording devices from every part of the IC field with the exception of a very limited amount of photographers. However this wouldn’t be a popular decision – there was quite a bit of unhappiness when I put my foot down and limited the number of photographers that could shoot battles. As far as I know we’re the only system who actively put a limit on and polices photographers – but I’d love to hear about any others that do. We just want people to play the game. And we want to make the system as immersive as possible for those who love playing it. That means less camera phones, less GoPros and less photographers. 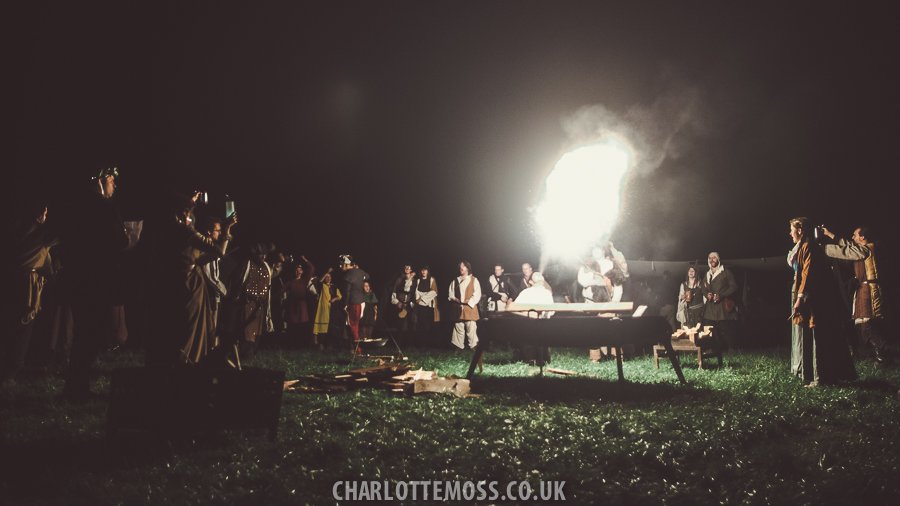 So a friend went to a different LRP earlier on in the year and I asked him how it went. ‘It was ok’ he said. ‘I liked the game and the setting, but there were way too many photographers’. On further discussion one of the things he brought up was the fact that a photographer had even used a tripod right in the middle of the road in front of the players in order to capture a shot. The photographers at the event had got in the way of the immersion and experience – and that’s not a good thing with LRP, right?

I admit, I take tripods onto the IC field. And I refuse to dress it up with fabric covered legs and scarves because ultimately these things just make you look like you’ve got a tripod covered in fabric and scarves. I prefer to carry my camera and tripod unadulterated because it means that I can be in and out faster, quicker and more safely. But I only use it in situations where I’m not going to draw attention to myself. Like the shot above, taken well after dark as you can see. The only light was the fire and so it was a long exposure on a tripod all the way in order to capture anything. However I got a lovely comment afterwards from my gorgeous fella in the middle breathing fire. He said ‘I didn’t think you took any photos of it. I looked for you and you weren’t there’. In reality I was sitting right in the front row, as you can see. He even stood in front of me at one point and still didn’t see me. I feel from comments like his that I’m getting something right with this LRP photography malarky. Either that or he’s unobservant. The jury is perhaps out.

But some other technology can be jarring in game too, and like the occasional photographer we accept it because it’s for the greater good. 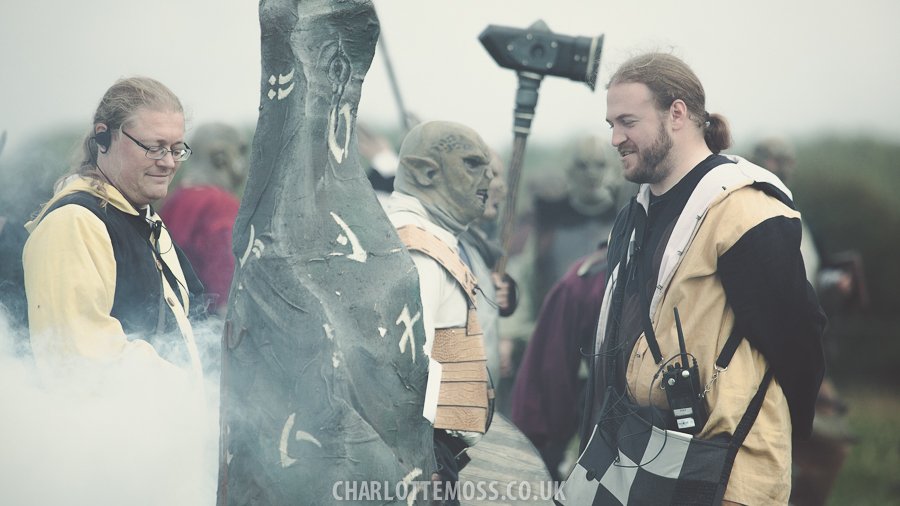 Two of my most favourite refs looking extraordinarily pleased at the pyros they’re setting off. Our Empire ref’s are the best – you give them something that goes BANG or produces smoke and they’ll be happy for hours.

Radio sets are one of those necessary evils required for such a huge game to run. Dozens of them are handed out at the start of an event for everyone from Refs and SFX crew to Egregors. There’s no way to get around the immersion breaking that they cause. ultimately you still usually have a radio hanging off your belt and some kind of black plastic or covert ear piece.

Lots of the crew who wear them in character do an exceptional job at hiding them in their kit. Sometimes with awesome beards. 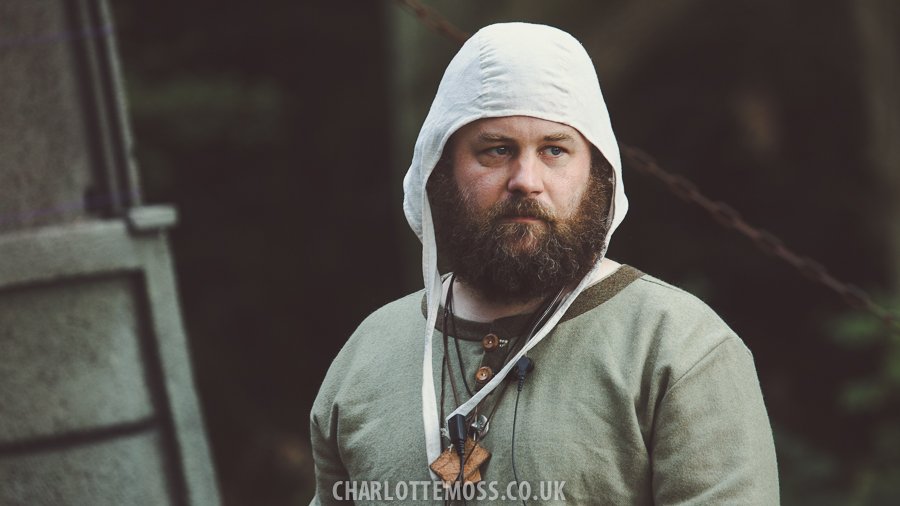 But is this not a bit like the cameras thing? We don’t want to completely ban cameras from the IC field because they do – in policed circumstances – provide benefits to the organisers and players.

I had a sweet new photographer with me last event who had not really been to LRP before. One of the parting instructions I left was ‘if you ever need help, just find someone who is wearing a radio’. Radios are obvious. They identify you in the field as being a member of crew who can help you. They’re a great security blanket to have in the game. Sure the radio unit itself really needs to be slipped into a bag or whatever, but having that earpiece provides an easy way to pick out someone who is crew.

There’s always ups and downs to every piece of technology included in the game. I could go on and mention the bar with it’s nice modern cellar technology… but I think I’d be hounded out of the hobby if I suggested that went!