I know that LRP isn’t historically accurate, but I don’t care. I’m an art history student and one of my favourite things to do is to research. Coming up with the concepts for S’s Mythlore costume has been a chance to research and take some inspiration from a culture that I’ve never really looked at before – Persia.

One of the things that I’m extraordinarily aware of as an art history student is the use and connotations of colour. When selecting the colours for the outfit I wasn’t just conscious of what would go well with his skin tones (he’s ginger so I’m keeping the colours muted) but also the colours that represent him as a character.

Initially I started off working with a palette of creams and browns, but it just felt too generic. I needed to introduce some other colours to create a statement about what he did. First came the blue, I won’t lie I have this gorgeous slate blue muslin that I’m itching to use on a project, and when I put it next to the grey linen that I picked up the other week they really just sung together.

But blue is problematic for me to use in kit. The problem with rich ultramarine blue is that before synthetic dye was created it was only possible to obtain this blue pigment from lapis lazuli rocks (the Egyptians also created Egyptian Blue, but the recipe was lost in the middle ages). And those rocks were only found in a handful of cave systems in Badakshan Province – modern day Afghanistan.

Ultramarine blue – the name of Lapis Lazuli once it has been made into pigment – is just the most beautiful blue and it’s the one that everyone seems to choose for their kit. They don’t generally use prussian, cobalt or cerulean because those blues just aren’t as eye-catching and wonderful. They use ultramarine, because it shines and sparkles in a way that you just don’t get from any other blue.

(ETA: Hadn’t also considered indigo blue – a different kind of blue but natural dye available from the East. My focus is on European art.)

I’m not saying here that people shouldn’t wear blue kit for LRP. Of course not, that would be ridiculous because it isn’t historical reenactment. However for my costume concept the use of blue sparingly is important.

Just so that we can get an idea of the kind of blue we’re talking about, here’s Johannes Vermeer’s Girl with the Pearl Earring. 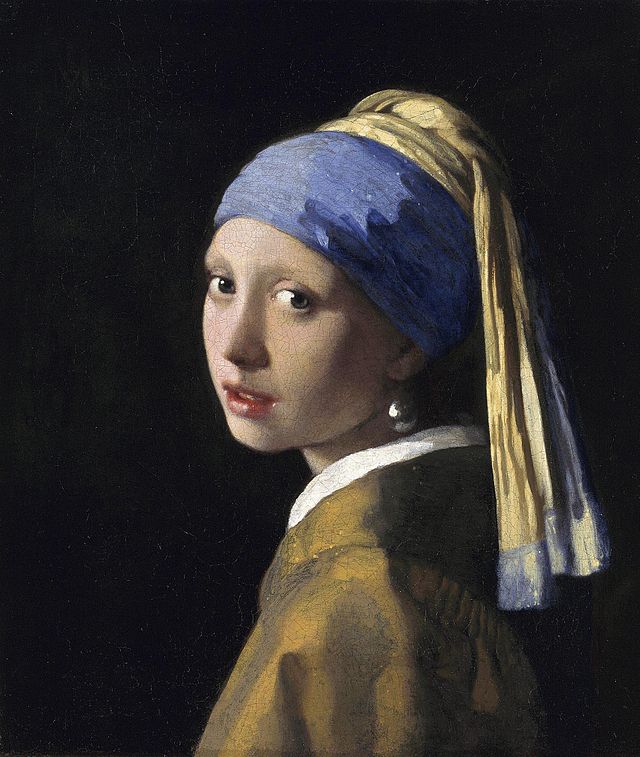 And one of my other favourite uses of ultramarine blue in the Wilton Diptych. 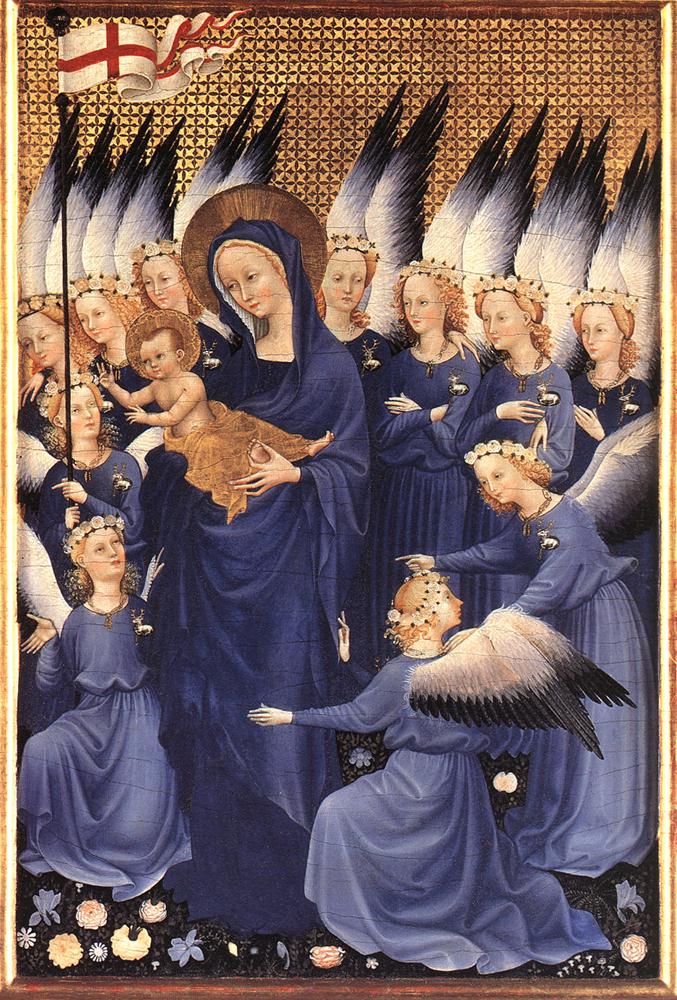 During the Renaissance patrons would actually specify a value of ultramarine pigment that would be used in the finished piece. The more money you spent on ultramarine then the more wealthy you would appear. Ultramarine blue was a status symbol, designed to show your wealth.

Did we see a similarity between the Vermeer work and the colour scheme in my designs? If he can use golden/mustard yellow with ultramarine blue then I certainly can.

So the key is that I’m using the blue sparingly on prestige pieces. At the moment I’m going to use it to line and trim the robe and also to create the armour and sashes. But I’m using an extremely thin and delicate fabric, a muslin. Something that wouldn’t have required too much dye – in fact as little as possible. And it’s a dark shade of blue too, so perhaps it might have been created with the remnants of a grubby dye bath that had been used for other garments beforehand. Ultramarine was almost always used at full strength in paintings so as not to dilute it’s richness – or sometimes with white added to create a tint.

Fortunately this group have a concept of being down on their luck. Once more wealthy than they are now, which allows an opportunity to play with the idea of people holding onto their kit that was once a status symbol. That is why I’m hoping to be able to create fantasy detailing to the back of the robes – this was someone who once had the money to spend on fashionable clothes, but perhaps now has been forced to sell everything he owns, and just keep his favourite pieces.

The golden yellow gown on the other hand has a different kind of symbolism. This character is cowardly and doesn’t want to fight or get involved. Judas (of Jesus’ disciples fame) is almost always painted in yellow garments and from there yellow has developed a potential reading of betrayal and cowardliness when interpreting works of art.

Here’s Judas, fourth figure from the left hand side, wearing a blue shirt with a yellow robe, in Da Vinci’s Last Supper.

And in Giotto’s The Kiss of Judas. 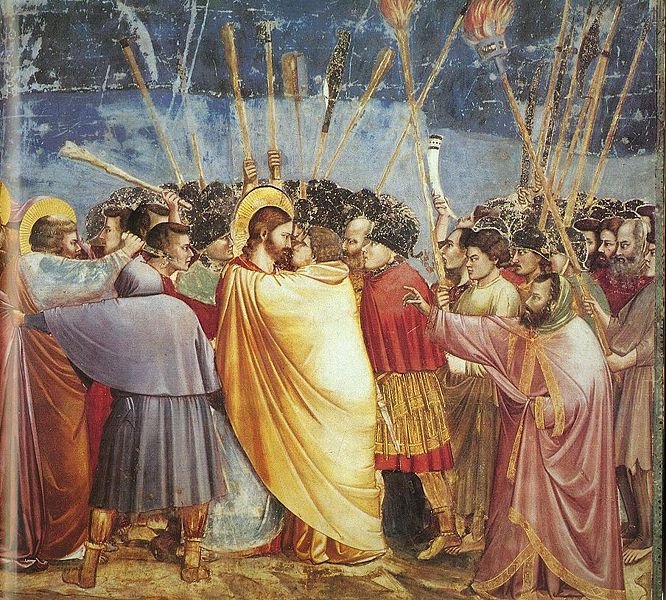 Yellow is not a colour of cloth that was not difficult to get hold of. In fact the Roman’s used to due their white clothes using urine. How… pleasant.

But anyway, since yellow cloth is available with far more abundance than blue, I decided to go with it for the base layers, which require far more cloth than any other piece. Yellow also has connotations of sickness and disease, appropriate for a physic I think. I’m not sure where that idea comes from, I’ve not managed to throw up any historical research (although I admit, I have not delved into any academic journals to write this – I’m doing it all from my head and class notes). If I was to make an educated guess I would assume it is due to the colour of infection. Lovely.

So there we have it. The reasons that I chose certain colours for this costume.

I also have another concern about this costume though, a little colour related. We’ve chosen muted colours deliberately. If this is a costume for a desert dwelling person, then strong colours would not stand up to the constant bleaching from the sun. Especially since this is a character who is down on his luck and may well be spending time travelling from place to place. And as I said before this kit is old, bought in times when things were easier.

But lots of larpers see Persian and other Eastern influenced nations as an excuse to wear lots of colour, so I’m afraid that this costume might stick out for those reasons. And also because of the fact we’ve opted to create entirely out of natural materials, which means linen and cotton basically for this one. The Eastern influenced nations across games seem to prefer often to use synthetic materials that have been heavily printed and so forth.