I love making costume. I swear that sewing and making is in my blood almost as much as photography. I’ve not been able to make nearly as much as I’ve wanted to over the winter though due to first having a tiny room in student digs, then finding myself living in one room at mine and my Dads old house with no heating… it wasn’t exactly conducive to costuming. However now I have a decent size flat with a HUGE front room and more than enough space to properly draft patterns on real rolls of pattern paper and then cut large amounts of fabric. Fabulous!

I didn’t yet have any costume for Odyssey, despite Odysey: The Arrow of Fire being my third event. So I figured I had two months to rectify that problem before Odyssey: The Dweller in the Deeps in August.

I started with the easy win. An outer tunic to hide my cameras. My cameras are obnoxiously obvious when I’m wearing them. The other problem has been that when I first started shooting LRP I shot with just a camera on a neck strap which wasn’t that invasive. As a result I made loads of light colour costume because it’s nice and cool and to be frank, I had about a bolt of Ikea muslin hanging around. Then I upgraded, bought an amazingly cool cross body camera strap but it’s black and has lots of straps and does not fit the world at all.

So it started off with this. I traced a pattern roughly off the top half of a hi-vis vest. If someone else has already done the work then why bother doing it again? Before extending the length to make it finish somewhere around my ankles. I was going to inset gores into it but decided that cutting it like this with a wider bottom would allow me to french seam the entire inside, which appears to my utter neat freak. Basically, I only ever make something if I can do a better job (or have it vastly cheaper) than I could buy it. So I meticulously finish inside seams (most of the time) in order to make myself something really nice.

Linen fabric: £7.10 from eBay including postage (Still have enough left to make sash and some bags).

This is actually it with the fabric cut out too. Since I’m so short I managed to cut these pieces selvage to selvage on the fabric (£8 linen from Ikea) meaning that it only took me a fraction over a meter and a half to make.

As I said, I french seamed the sides and shoulders to make the basic structure. 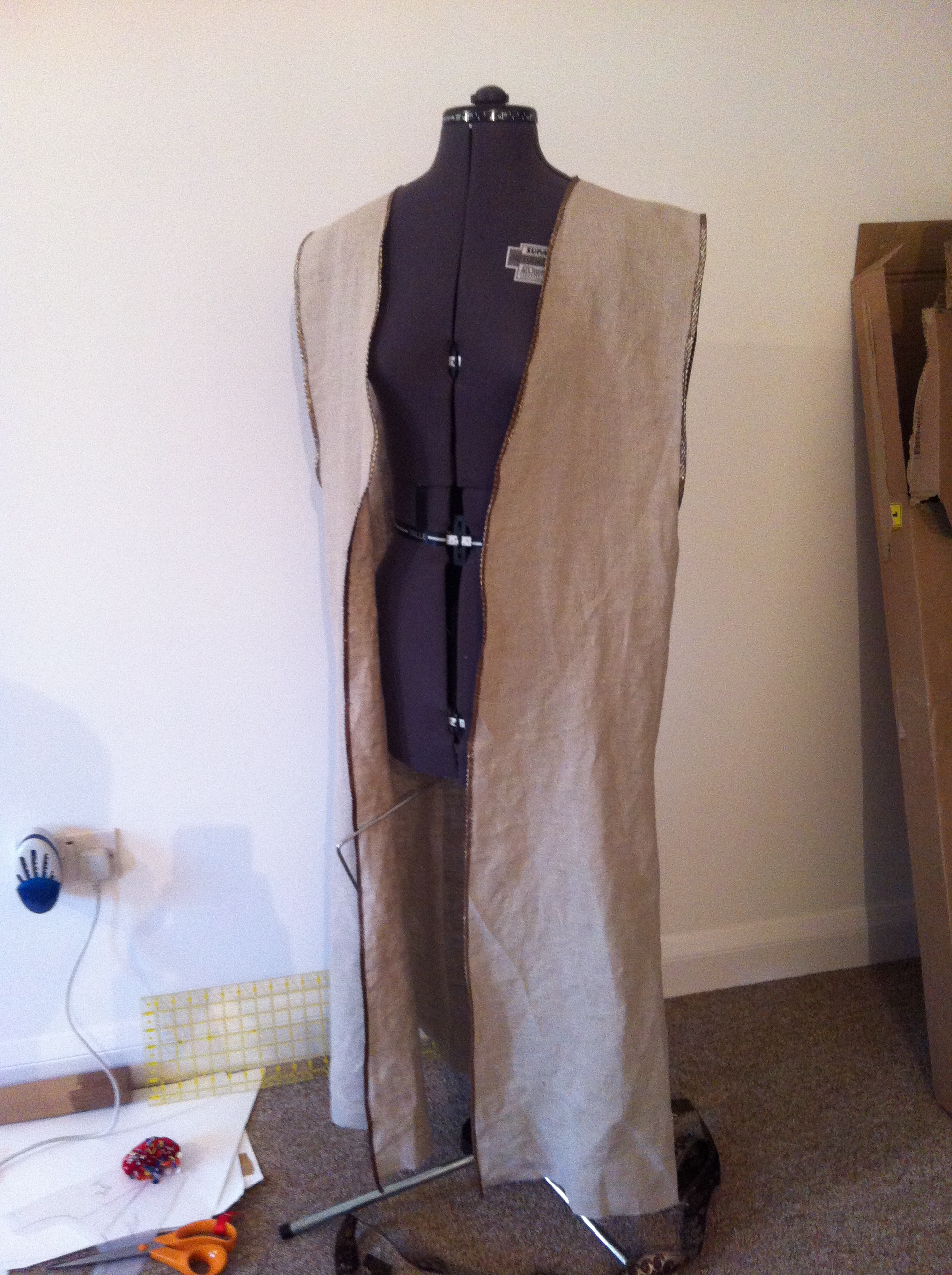 This is it unironed at the moment which is why it’s a slightly strange shape. You’ll also notice that I edged the front opening, neck and arm holes in cute bias tape. I’m just waiting for it to hang for a couple of days before I cut and finish the hem. Nothing special, I’m just going to turn it up and inch or so.

I’ve also got to the stage where I’ve begun acquiring random bits of pattern paper with vague instructions written on them. So I’ve started to store them like this, with a picture of the garment and some brief notes: 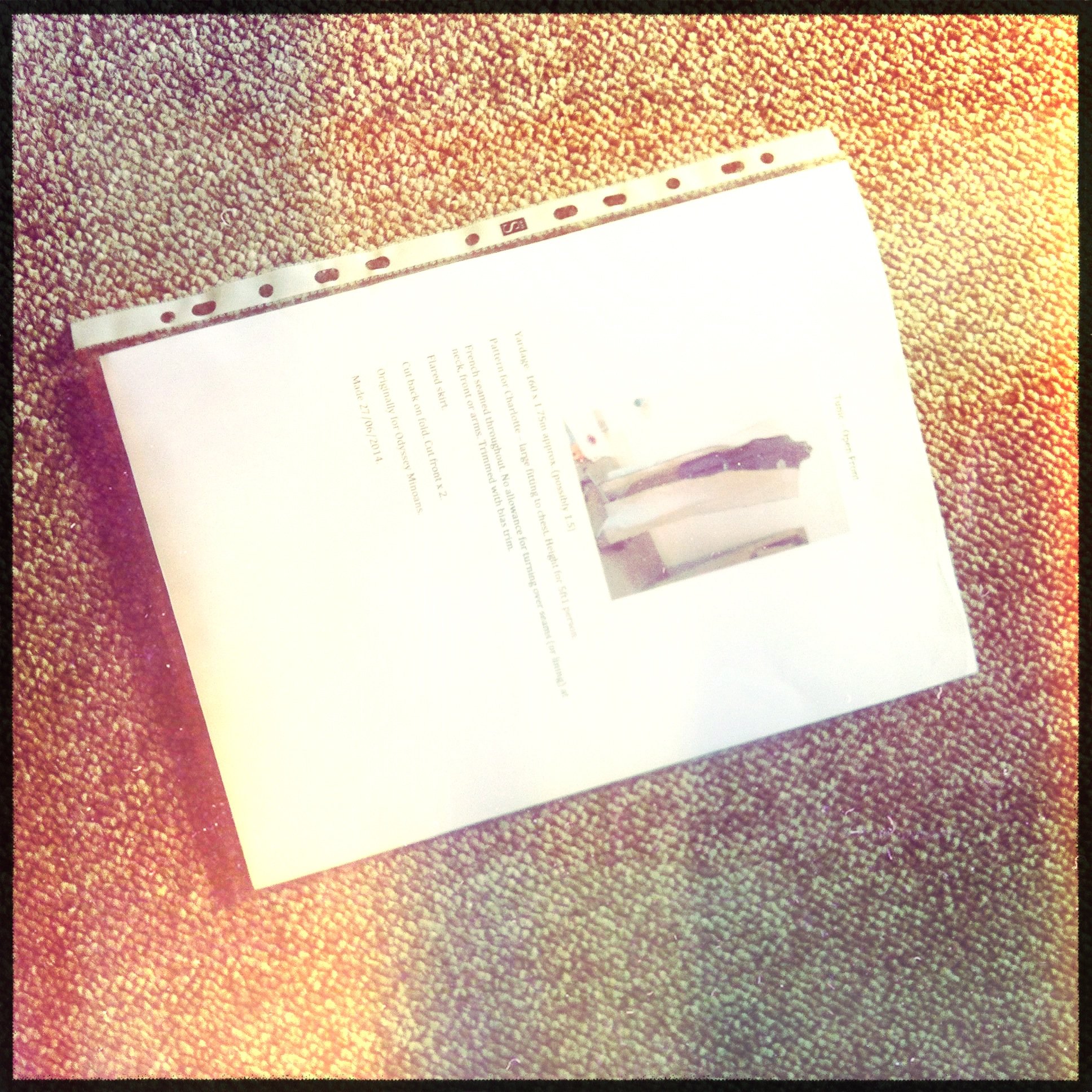 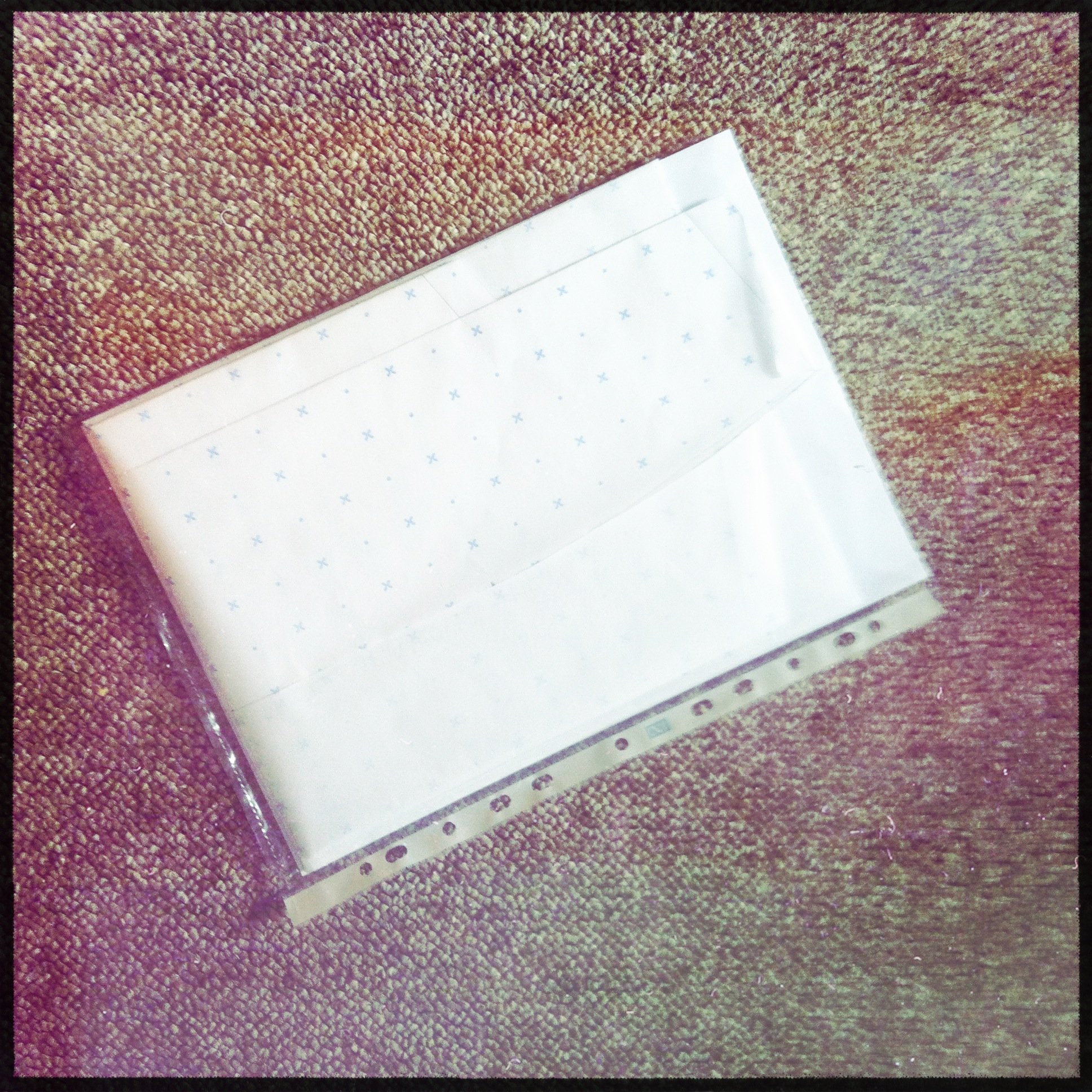 Still to make/finish for next Odyssey:

I should also show you come of the goodies that I got for the next Odyssey too. A tray and bowls from Ikea to fill with nice cheese, bread and olives for the Minoan tent. Not that we’re having a middle-class thing in there. We’re not a bunch of foodies at all… 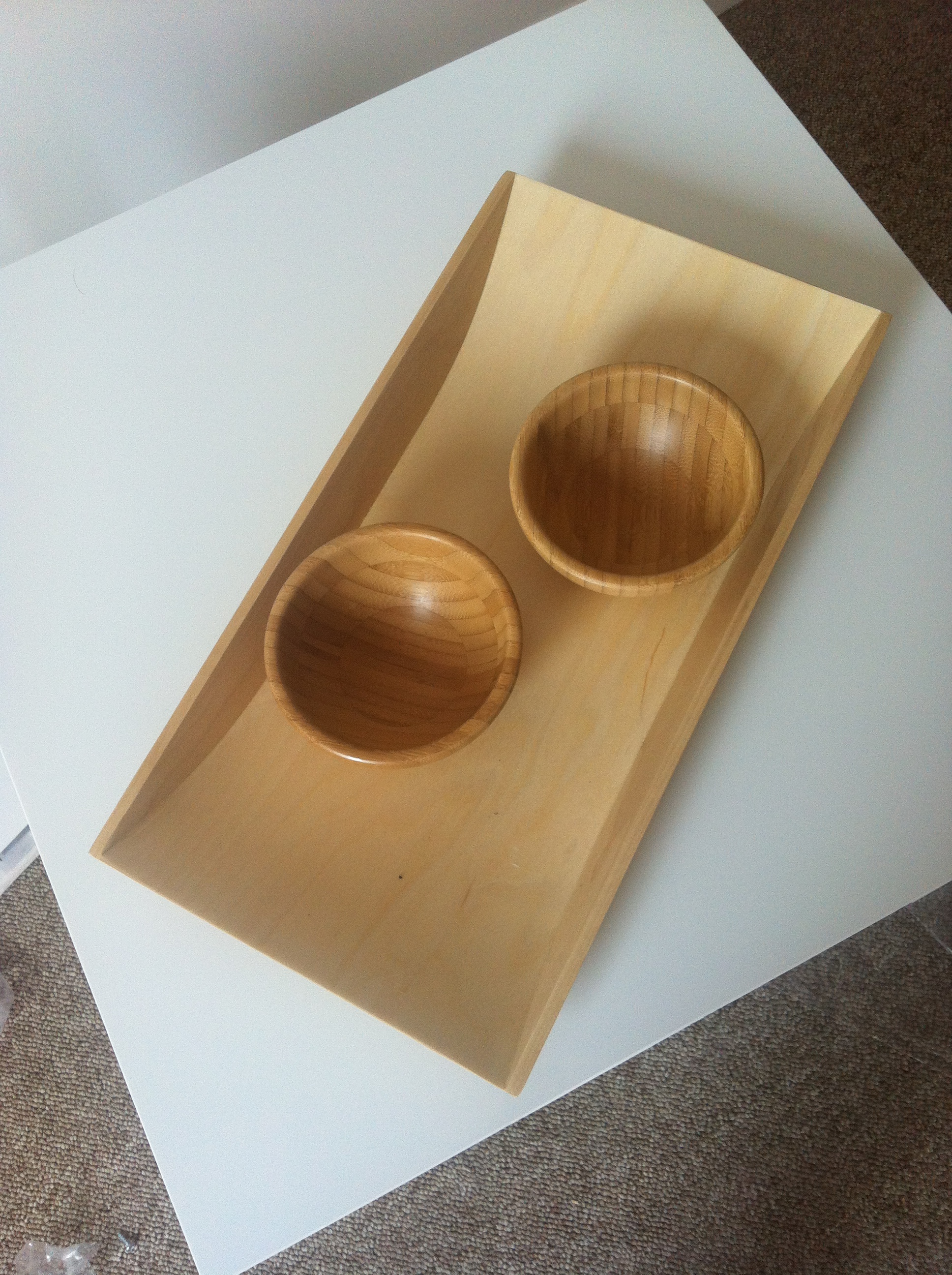 And not to forget, the miles and miles of fabric that I bought last weekend. About 26 meters of it in total, including the linen for this tunic.

More grey linen too, not sure what I’ll make from that. Potentially a nice, long tunic as an alternative to the black one. The self striped fabric is actually a bedspread, I thought it would make nice Minoan trousers, but it all looked a bit beige when I held it up to the tunic. They might still be trousers for another outfit though. Or possibly a shirt. 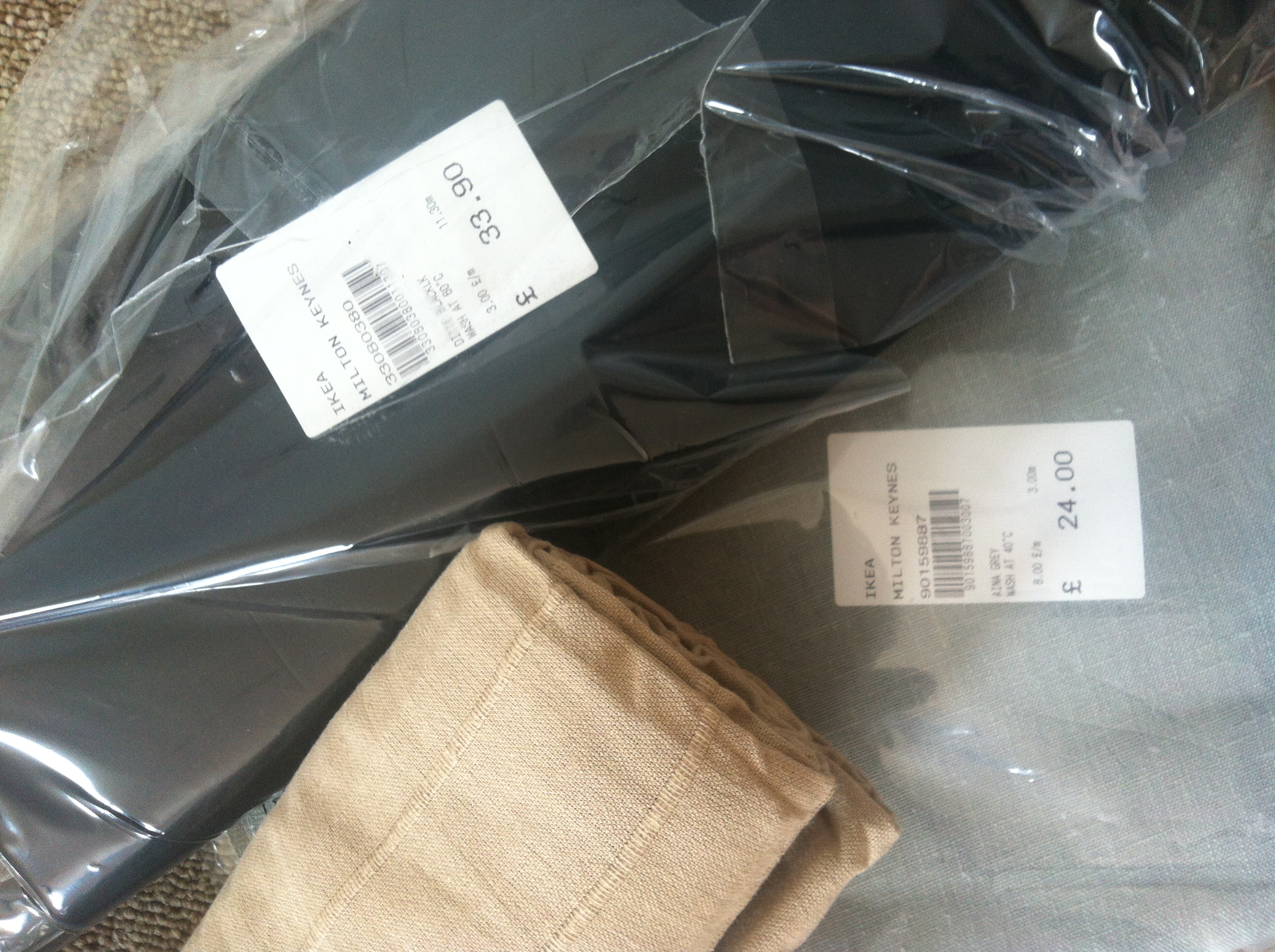 And this is 16 meters of gorgeous muslim from Tahim’s in Coventry. It’s not blue, but rather a beautiful slate grey. It’s destined to be shirts and things so that I can keep putting on clean clothes at events. It’s gorgeously thin, very slightly sheer. Perfect for summer. I also bought myself some commercial patterns from Simplicity to make them out of, but I’m not so convinced having looked at them closely.